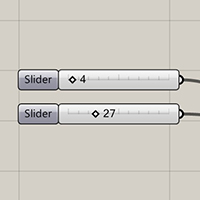 There is big trend about parametric approach and computation in design and architecture. In the last months, I’ve repeatedly been involved in discussions about if it would be more exact to call what we do as designers “computational design” or “parametric design”. It is not a useful discussion, I have to say.

But what is the difference between “parametric design” and “computational design” ?

I don’t know. “Computational design” refers to the use of computers and mathematical approach to the generation of geometries, objects and architecture. “Parametric design” is about using parameters to design things. It means that if parameters changes, the result change. Regardless of which expression is the best, what interests me the most is the idea of focusing on design process instead of designed objects.

the most interesting shift in design is that we have passed from designing object to designing networks and processes http://t.co/iwg54WHo The process is everything

The process is everything (Mies would say that “God is in the process”) and that’s why I think that “parametric design” is still an interesting way to explain our approach. Parameters is about changing conditions and adaptability to user needs. We need to design process instead of objects.

François Roche recently published on his blog our emails exchanges about these topics. If you know him a bit, you would not be surprised to see that he’s not very polite. If you don’t speak French, try to google translate the post.

François Roche says that “computation is a good think, not parametric design…it’s like confusing science with the power of science”.

I answered “Personally, I’m more interested in action than language.”

I like to shuffle things and confuse myself and the others, so I use both expressions. In English I mainly define myself as a computational designer, but working in France, I tend to use “Architecture Paramétrique” and “Design paramétrique” because there is no right word to translate computational (I don’t like architecture numérique). Let’s give some examples.

At Hugh Dutton Associates and on complexitys.com we use mainly “parametric design” or “performance-driven design” because we think that our role as designers is to pick parameters and information streams and let them converge to a project (designer as a medium).

What about Andrea Graziano ?

I used the image above to introduce REaction 1401 workshop last week-end and I will use it again to introduce our next international workshop with Andrea Graziano, DATA BODIES, taking place in May.

I’ve already had this discussion with Andrea, one of the most influent computational designers in Italy and Europe : he doesn’t like when I say he’s a parametric designer :) Do you want to join the discussion about computational VS parametri design?
Leave a comment or register for the workshop !

7 thoughts on “Parametric VS Computational Design”